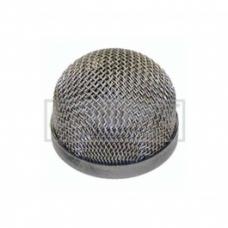 High Quality Reproduction Air Cleaner Flame Arrestor Cap Double Stainless Mesh Construction Fits Over Breather Tube Inside Air Cleaner Base Fits All One Inch Breather Tubes Flame arrestors are your 1964, 1965, 1966, 1967, 1968, 1969, 1970, 1971 or 1972 Nova or Chevy II engine's first line of defense. If there is a backfire of fuel through the carburetor, the flame arrestor cuts the oxygen supply to the fuel suffocating the flame. The breather arrestor cap prevents debris from falling into the flame arrestor. Our double stainless mesh screen fits over the breather tube inside the air cleaner base just as the original. Don't take chances with your 1964, 1965, 1966, 1967, 1968, 1969, 1970, 1971 or 1972 Nova or Chevy II's engine.