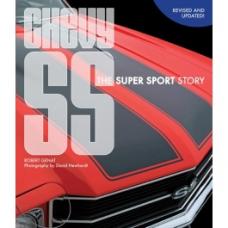 Description Reviews (0) Product Q&A
Flexibound 348 Pages On the 1957 auto show circuit, Chevrolet unveiled a show car based on its Corvette and dubbed it the ?Super Sport.? The performance car world took one look and never looked back. A combination of styling and performance upgrades, the SS package could turn something as mundane as a six-cylinder Malibu into the fire-breathing Chevelle SS396. This book traces the long line of legendary SS models, from Chevy?s Super Sport version of its popular Impala, which marked the dawn of the muscle car era, to today?s Impala SS. Featuring the work of acclaimed photo ace David Newhardt, Chevy SS: The Super Sport Story provides a close-up, detailed, full-color look at such classic muscle cars as the Chevelle, the El Camino, the Malibu, and the Monte Carlo as well as today's hot Camaro SS. The book is a fittingly elegant celebration of the cars that redefined ?high performance? and defined an era.