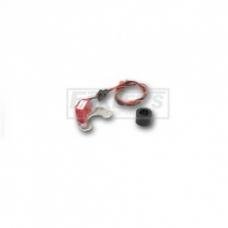 Replaces Points & Condenser With Modern Electronic Ignition Hidden Inside Your Stock Distributor Gives Improved Mileage & Horsepower Bolts In Place Of Points When it comes to your Nova or Chevy II ignition system, there's absolutely no need to contend with the technology of the 70's and before. Not when you can bolt-in today's electronic timing benefits in the form of the Pertronix Ignitor II! This system gives your 1962, 1963, 1964, 1965, 1966, 1967, 1968, 1969, 1970, 1971,1972, 1973 or 1974 Chevy II or Nova a huge improvement in your ignition dwell. Plus the whole conversion remains under the stock cap so for restorers the car appears dead stock. Upgraded electronics allow it to sense the coil current level and use a powerful micro controller to adjust the dwell accordingly. Ignitor II also develops up to 4x more energy between 3,000 and 5,000 rpm than standard ignition systems.